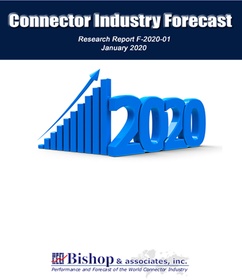 Be aware and prepared for the head- and tailwinds that are impacting the connector market in 2020 and beyond. Order your copy of the Connector Industry Forecast today.

Bishop & Associates has just released the 2020-2025 Connector Industry Forecast. This eight-chapter report provides an in-depth, and detailed forecast of the worldwide connector industry.

In addition to the detailed forecasts for each region of the world (North America, Europe, Japan, China, Asia Pacific, and ROW), an industry overview is included which provides current market trends, including connector confidence level, currency fluctuation effects, and industry sales performance, as well as an outlook narrative.

Worldwide and each regional forecast includes:

All regions except North America showed negative growth in 2019. China, which has been the golden child of the electronic connector industry experienced the greatest decline, decreasing X.0%. This is the largest decline in Chinese connector sales since 2009, when sales declined 12.3%. Europe, who has seen two very strong years, with sales increasing 11.6% in 2017 and 14.7% in 2018, saw the next greatest decrease, with sales declining X.X%. The ROW region, who has experienced sales growth in eight of the last ten years, followed Europe with a decline of X.8%.

With sales declining X.1%, Japan follows ROW. Although over the last ten years (2009 through 2019) Japan has experienced a couple of years of outstanding growth, including 2010 when sales grew an astonishing 34.1% and 2017 where sales exceeded the overall industry growth, increasing 11.7%, 2019’s decline brings Japan to sales levels just slightly better than those seen in 2009, when sales fell to $4,565 million.

The Asia Pacific region, which over the last ten years has witnessed steady, but lack luster growth, follows Japan, with sales declining X.8%.

The connector industry’s sales by region are noted in the following table. 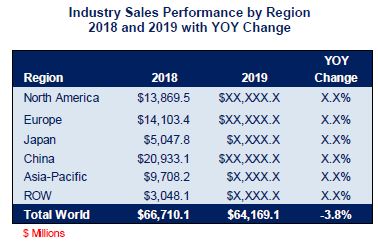 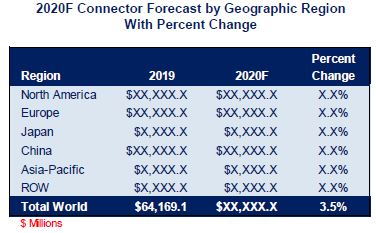 It is important to note that this forecast is based on the following assumptions: