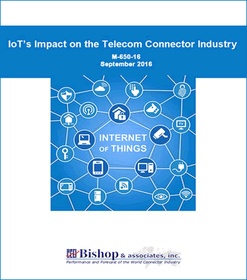 By 2020 there will be more than 50 billion devices connected to the Internet in some way, shape, or form. While most of these “things” will be connected wirelessly, they will still give rise to equipment that communicates and saves all the data that is being collected.

This report focuses on the telecom/datacom sector, and how the IoT intertwines applications within the consumer and computer sectors through the expansion and growth of the telecom industry. IoT’s Impact on the Telecom Connector Industry examines the equipment and connector types within these sectors most likely to be influenced by the IoT. The report offers a quantitative analysis by region, sector, equipment type, and predominant connector type, allowing those most affected by the growth of the IoT to accurately position themselves. Don’t be caught offline – order your copy today.

The Internet of Things Impact on the Connector Industry - Volume 1, Consumer, Computer and Telecom Markets

Republished by request, Bishop and Associates’ IoT’s Impact on the Telecom Connector Industry examines the effect the IoT will have on the telecommunications industry and in particular how the telecom industry relates to the consumer and computer markets within the IoT framework. This five-chapter, 162-page research report provides an in-depth analysis of the applications and connectors used in these three market sectors, providing sales dollars by application, product family and type.

Some think that the Internet of Things (IoT) term was coined rather recently, but it was used as early as 2009 by Kevin Ashton to describe the new idea of linking RFID in Proctor & Gamble’s supply chain to the Internet. He used it to describe his vision of computers keeping track of and counting everything, as opposed to people feeding this information into computers by typing, pressing a record button, taking a digital picture or scanning a bar code. Ashton’s vision is this: “If we had computers that knew everything there was to know about things—using data they gathered without any help from us—we would be able to track and count everything, and greatly reduce waste, loss and cost. We would know when things needed replacing, repairing or recalling, and whether they were fresh or past their best. We need to empower computers with their own means of gathering information, so they can see, hear and smell the world for themselves, in all its random glory. RFID and sensor technology enable computers to observe, identify and understand the world—without the limitations of human-entered data.”

While the IoT is not quite at the level that Ashton envisioned yet, it is well on its way with a plethora of “things” being tracked. These “things” range from a Fitbit you wear on your wrist to track your health and fitness to tracking farmers’ tractors and everything in between. These “things” are pervasive in our everyday lives now and new ones are being invented at increasing rates.

The goal of this report is to explain the different IoT vertical markets and technologies within the telecom market and to detail the effects these may have on the computer and consumer markets, as well as the connector industry. Chapter 2 of the report covers definitions that will be used throughout the report, and Chapter 3 highlights the wireless technologies and trends in the IoT market specific to telecommunications, computer and consumer devices. Detailed in Chapter 4 are IoT devices and applications and the specific connector products that are affected by them. In Chapter 5, five-year forecasts for these connectors segmented by region, market segment and Bishop’s traditional connector categories are provided. In addition, included are forecasts for specific connector product types that are poised for growth due to IoT applications. These include modular jacks used in networking applications; board-mount high-speed I/O; USB; micro-coax for smartphones; FPC/FFC used in portable devices; and HDMI used in HDTVs and displays.

The total market for IoT connector products sold into computer, consumer and telecom applications reached more than $14.5 billion in 2015 and is anticipated to grow significantly by 2020, resulting in substantial increases in a number of key connector products. 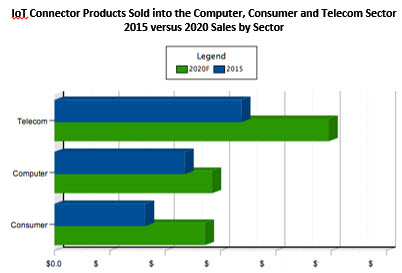 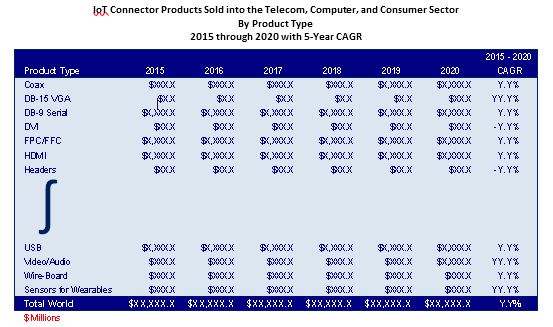