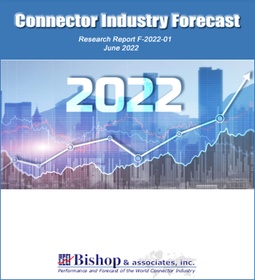 Although 2021 proved to be a year full of surprises, it appears that despite several strong headwinds, 2022 is proving to be even more surprising!

2022, like 2020, is turning out to be a year no one could have expected. Review the connector industry’s extraordinary performance, order your copy of the Connector Industry Forecast.

Bishop & Associates has just released the Connector Industry Forecast. This eight-chapter report provides an in-depth, and detailed forecast of the worldwide connector industry. In addition to the detailed forecasts for each region of the world (North America, Europe, Japan, China, Asia Pacific, and ROW), an industry overview is included which provides current market trends, currency fluctuation effects, and industry sales performance, as well as an outlook narrative.

Worldwide and each regional forecast includes:

After what we thought would be one of the most interesting years ever, 2022 is shaping up to be even more astonishing than 2021. Bookings remain extremely high, while component shortages, particularly in the semiconductor area continue to hold up shipments of not only automobiles, but also gaming devices, computers, appliances, and other personal electronics. Even with the shortages, which now also include a variety of raw materials, and in some cases even labor, connector manufacturers are still experiencing good shipments!

For the first time in 19 months, billings were negative in April, although year-to-date billings were up 8.3%. Sequentially billing also declined in April, decreasing 10.5%. April was also the first time in 20 consecutive months that bookings declined. Some feel this is the precursor to a shrinking backlog, but with backlog at 16.1 weeks year-to-date through April, it will take several months of declining bookings to shrink the backlog to more normalized ratios.

As indicated by the chart below, growth was not equal across all regions in 2021 nor will it be in 2022. The ROW region, which includes Central and South America, South Africa, and Russia saw the greatest growth at 31.2%. The ROW region was followed by Europe with growth of 26.8% and the Asia-Pacific region with growth of 25.9%. China, the largest region for electronic connector sales increased 23.8%. Japan, which has struggled for the past several years to bring sales back to their high of $6.4 billion in 2012, showed the least growth, with sales only increasing 19.1%. North America, who had previously proved to the world that they could rapidly divert manufacturing capacity from one industry to another, saw connector sales increase a healthy 22.2%. Examining 2022, you see quickly that North America who was ranked fifth out of six regions for percentage growth in 2021, is ranked number one in 2022 with growth of Y.Y%. North America is followed by the ROW region, who drops from number one to number two in percentage growth, and who exhibits growth of Y.Y%. Japan, who as we previously mentioned has struggled to bring sales past the $5 billion mark, will show the least percentage increase, with sales only increasing a mere Y.Y%. In addition to connector sales results varying by region in 2021, electronic connector sales will also vary remarkably by market sector in 2022. As the table below shows, in 2021, the industrial market, which encompasses a variety of equipment, including industrial automation and process control equipment, robotics, machine tools, and machinery, energy generation and distribution, and building and civil engineering saw the greatest percentage growth, at 29.3%. The industrial market was followed by the telecom/datacom market where sales grew a strong 26.4%. Naturally this growth was driven by the increase in internet activity and the continuing drive towards 5G. These two market sectors were followed by the medical equipment sector, where not only the need to increase or replace therapeutic equipment drove sales, but also the increase in diagnostic equipment. Surprisingly enough, these two market sectors were followed by the transportation sector, where increases in rail and commercial vehicles continued to drive the market. With industry backlog at an all-time high and year-over-year growth in the double-digit range through the first four months of 2022, Bishop is forecasting 2022 sales to grow by Y.Y% to $XX,XXX.8 million. We anticipate the greatest percentage increase will occur in North America, where sales will increase Y.Y%, followed by ROW where sales will increase Y.Y%. As seen in the past few years, in US dollars, the smallest growth will be seen in the Japanese region, where connector sales will increase by $XX.2 million or Y.Y%. The Japanese region will be followed by ROW, where although percentage wise sales will show high single-digit growth, sales in US dollars will only equate to growth of $XXX.4 million.