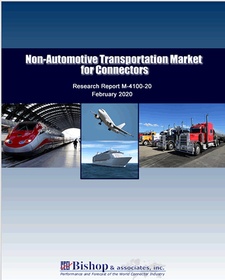 Bishop & Associates latest research report, Non-Automotive Transportation Market for Connectors examines the technology, trends, and products that are driving the growth of the various sub-sectors within the transportation market. Forecasts by transportation sector, product type and region are provided, along with five-year compound average growth rate projections. This report examines the following questions, and more.

Bishop & Associates, Inc. has released a new 10-chapter, 253-page research report, providing a detailed analysis of the non-automotive transportation market for connectors. This new report explores the various sectors and sub-sectors of this marketplace, as well as the connector types used within these sectors.

Sectors discussed in this report include:

Market values and forecasts covering the period 2019 through 2025F are provided, along with five-year CAGR figures by region of the world, sector and sub-sector.

The non-automotive transportation market includes most vehicles and forms of transportation, except for passenger cars and light trucks and vans. Each of these forms of transportation is designed and engineered to best suit the medium in which it operates: rail, road (on-road and off-road), air, or sea. On one hand, the transportation market is a very diverse market segment which includes huge oil tankers, rolling stock and locomotives, heavy trucks, and construction machinery, as well as commercial jets, ATVs and small recreational vehicles, and farm tractors. On the other hand, these very different vehicles have several things in common:

Another aspect that ties all the various forms of transportation together is that data networking (a data bus) has become an essential part of managing and controlling fleet and system operations. This report examines, by transportation mode, the various networking protocols used, and how these networks are altering the transportation sector. In the following graph, the relative size of the connector market within the transportation sector in each region is represented by the size of the bubble. On the x-axis, the average annual compound growth rate (CAGR) of the regional market is plotted over the past 10 years (2009-2019), while on the y-axis, the forecasted five-year CAGR (2020 through 2025) is plotted. This graph shows the Chinese market is poised to outgrow all other regions. As a result, China will become the leading transportation market for connectors in the coming years. North America and Europe are almost equal in size but the North American transportation market for connectors is set to outpace the European market during the forecasted period. Japan, which has experienced several years of declining sales, still lags well behind all other regions 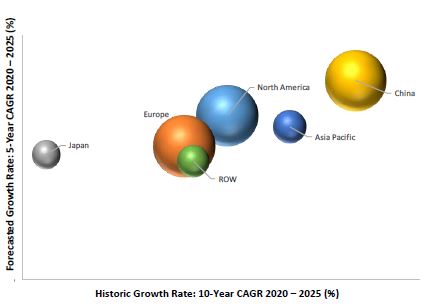 Regulation and standardization are significant factors impacting the transportation industry. Many recent rules and regulations are related to safety and environmental requirements. Most governments, especially those in Europe, Japan, and North America, have set standards for clean air, which impact every vehicle emitting emissions into the atmosphere. China has also started to implement similar requirements. To meet these environmental standards and requirements, engine technology will change, driving early replacement of vehicles or ships with older technology, or non-conforming engines. To meet enhanced safety requirements, increased technology will be implemented, which will also allow operators to detect problems at an early stage. In addition, technology will be added and used to make transportation more efficient. Safety, efficiency, and environmental impact are the three key imperatives driving the transportation industry in the coming years.

Connector consumption in the transportation market sector reached nearly $4.5 billion in 2019, a decrease of 3.8% over 2018, primarily a result of a slowdown in the world economy. The decline was not the same across all sub-sectors, nor is the $4.5 billion evenly distributed across all modes of transportation. Several subsectors, such as commercial marine and rail and rolling stock, performed better than others. At the same time, connector consumption within each subsector varies greatly, with commercial vehicles representing the largest portion of connector consumption and RV and power sports representing the smallest portion. Continued adoption of technologies that will allow OEMs to comply with new rules and regulations regarding emissions and safety requirements, as well as a need to meet efficiency demands and provide an enhanced user experience, will guarantee further growth for connector manufacturers in this market.