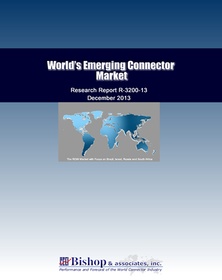 2013 World’s Emerging Connector Markets; The ROW Connector Market with Focus on Brazil, Israel, Russia, and South Africa is a six-chapter, 288-page, report analyzing the $2.7 billion “Rest of the World – ROW” electronic connector market. The report provides detailed connector market statistics and background information by end-use equipment market and product type for four countries in the ROW region and the group “other ROW countries”.

The “Rest of the World” or ROW region covers South America, Central America, Africa, the Middle East and parts of central Asia, including Russia. Turkey, Mexico, China and India are not part of this region. 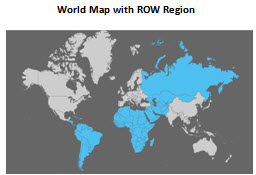 The ROW region is a patchwork of economies in different stages of development but also includes a handful of emerging and growing connector markets. Brazil and Russia are included in the so-called BRIC countries. The connector market in Israel is a lot smaller in comparison to Brazil or Russia, but it is one of the few high-tech, highly developed economies in the ROW region. South Africa boasts the biggest economy, measured by GDP, in Africa and is also considered an important emerging economy in this region. All remaining countries in the ROW region are grouped together as ‘other countries’.

The report provides data by end-use equipment market and product type for the entire region and each of the countries mentioned previously, for the years 2010, 2011 and 2012, and projections for 2017 (including five-year CAGRs). 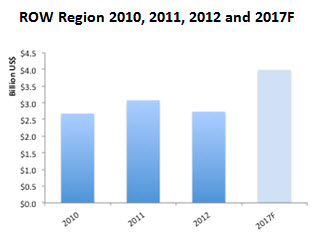 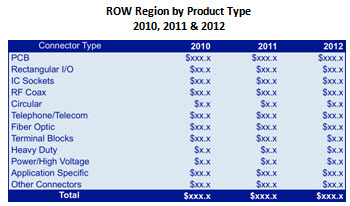